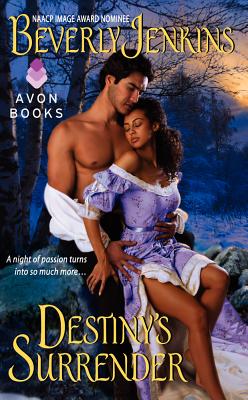 This is book number 2 in the Destiny Trilogy series.

Andrew Yates has come to a decision: it's time to stop sowing those oats and start a family. But searching for a bride isn't as simple as he'd hoped, and many of the respectable women of his acquaintance feel . . . lacking. Then beautiful, feisty Wilhelmina "Billie" Wells arrives at the family ranch with a toddler in her arms, claiming Drew is the father!

Billie had no choice but to show up at Destiny in search of Drew. For the sake of their child, she's willing to leave him with his father so the boy can have a better life, but then, before she can blink, she's saying "I do" in front of a preacher in a marriage of convenience. All Billie and Drew have in common is the heat that brought them together, but can their sizzling passion lead to an everlasting love?

Beverly Jenkins is the recipient of the 2018 Michigan Author Award by the Michigan Library Association, the 2017 Romance Writers of America Lifetime Achievement Award, as well as the 2016 Romantic Times Reviewers’ Choice Award for historical romance. She has been nominated for the NAACP Image Award in Literature, was featured in both the documentary Love Between the Covers and on CBS Sunday Morning. Since the publication of Night Song in 1994, she has been leading the charge for inclusive romance, and has been a constant darling of reviewers, fans, and her peers alike, garnering accolades for her work from the likes of The Wall Street Journal, People Magazine, and NPR.

To read more about Beverly, visit her at www.BeverlyJenkins.net.

“Her stories are delicious and always leave behind both feelings of satisfaction and want...for her next novel.”
— Fresh Fiction

“Jenkins is a gifted storyteller who knows how to bring special spark and sass to romance.”
— Romantic Times BOOKclub

“Each book by Jenkins is better than the last.”
— Romantic Times BOOKclub