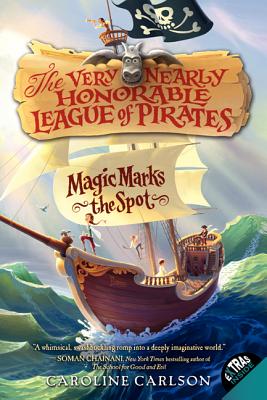 This is book number 1 in the Very Nearly Honorable League of Pirates series.

Hilary Westfield has always dreamed of being a pirate. She can tread water for thirty-seven minutes. She can tie a knot faster than a fleet of sailors, and she already owns a rather pointy sword.

There's only one problem: The Very Nearly Honorable League of Pirates refuses to let any girl join their ranks of scourges and scallywags.

But Hilary is not the kind of girl to take no for answer. To escape a life of petticoats and politeness at her stuffy finishing school, Hilary sets out in search of her own seaworthy adventure, where she gets swept up in a madcap quest involving a map without an X, a magical treasure that likely doesn't exist, a talking gargoyle, a crew of misfit scallywags, and the most treacherous—and unexpected—villain on the High Seas.

Written with uproarious wit and an inviting storyteller tone, the first book in Caroline Carlson's quirky seafaring series is a piratical tale like no other.

Caroline Carlson is the author of the Very Nearly Honorable League of Pirates series and The World's Greatest Detective. She holds an MFA in writing for children from Vermont College of Fine Arts and lives with her family in Pittsburgh, Pennsylvania. You can visit her online at www.carolinecarlsonbooks.com.

A whimsical, swashbuckling romp into a deeply imaginative world; Carlson’s novel is as plucky and clever as its heroine.
— Soman Chainani, New York Times bestselling author of The School for Good and Evil

Avast! Pirates, magic, girl hero and a gargoyle sidekick? YES!! MAGIC MARKS THE SPOT is an amazing debut, a funny, rollicking adventure featuring a take-no-prisoners heroine and a cast of colorful characters. I eagerly look forward to the next book.
— Sarah Prineas, author of The Magic Thief series and the Summerlands series

“There’s merriment and intrigue on the high seas in this debut novel… Carlson’s characters are as memorable as they are entertaining.”
— Publishers Weekly (starred review)