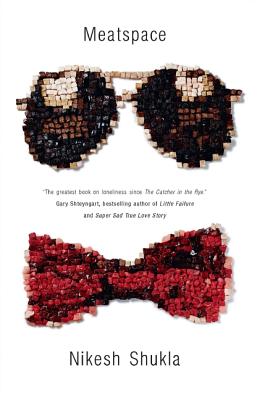 "Meatspace is the greatest book on loneliness since The Catcher in the Rye" - Gary Shteyngart, author of Super Sad True Love Story

Kitab has had a rough few months. His girlfriend left him. He got fired from his job for writing a novel on company time, but the novel didn't sell and now he's burning through his mom's life insurance money. Kitab is reduced to spending all of his time with his brother and roommate Aziz, coming up with ideas for novelty Tumblrs and composing amusing tweets. But now even Aziz has left him, travelling to America to find his online doppelganger.

So what happens when Kitab's only internet namesake turns up on his doorstep and insists that they are meant to be friends?

In a time when we are obsessed with and defined by our online personas, this clever, sharp, and often hilarious novel dares us to question who we are when we're not in cyberspace but in "meatspace," the real world where people actually talk to each other in the flesh.

Nikesh Shukla is a writer of fiction and television and host of the Subaltern podcast. His debut novel, Coconut Unlimited was shortlisted for the Costa First Novel Award 2010 and longlisted for the Desmond Elliott Prize 2011. Meatspace is his second novel.